Teens who tan indoors may be more likely to smoke, drink, use dr

Teens who tan indoors may be more likely to smoke, drink, use drugs 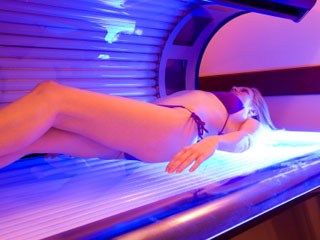 (HealthDay News) -- New survey results suggest that teenagers who go to tanning salons are more likely to smoke, drink and use illegal drugs and steroids.

The findings, from Colorado, don't prove that indoor tanning prompts risky choices about drugs, alcohol and steroids. But the results do suggest that teens who tan indoors -- upping their odds for skin cancer -- might also be prone to do other potentially dangerous things, the researchers said.

"This makes them an especially vulnerable group," said Dr. Eleni Linos, an assistant professor of dermatology with the School of Medicine at the University of California, San Francisco.

Teen use of tanning beds is an important issue because they pose more danger to younger people, noted Linos, who was not involved in the study.

"Those who use tanning beds before age 25 have almost double the risk of malignant melanoma and a 70 percent higher risk of non-melanoma skin cancer," she said.

Even a few hours at a tanning salon can be dangerous. "Every time you tan, you increase your risk of getting skin cancer, including melanoma," Linos said. "Indoor tanning also causes premature skin aging, like wrinkles and age spots, and changes your skin texture."

Last month, the U.S. Food and Drug Administration proposed a ban on indoor tanning for those under the age of 18 in response to those health concerns. The public has 90 days to comment on the proposal.

In the new study, a team led by University of Colorado researchers examined the answers of over 12,000 Colorado high school students who responded to a survey.

After adjusting the survey responses so they would better reflect the students as a whole, the researchers found that 7 percent of the respondents said they'd tanned indoors at least once in the past year. Females were about as twice as likely as males to say they used tanning salons.

Females who tanned indoors were especially likely to use Ecstasy and abuse prescription drugs, while males seemed to be especially drawn to steroids and heroin, said study co-author Dr. Robert Dellavalle, an associate professor of dermatology at the University of Colorado.

Gery Guy Jr., a health economist with the U.S. Centers for Disease Control and Prevention, said the study provides more evidence linking tanning at salons and other risky behaviors. He has worked on previous research that connected tanning to heavy drinking, use of illegal drugs and steroids and unhealthy weight-loss choices.

What's going on? "It's a short step for a teen involved with one risky health behavior to try another," Guy said. Teens at risk may suffer from low esteem or depression, he said. They may also be worried about how they look, he said, and this could drive them to do risky things.

As for prevention, Guy said parents are key because studies show their attitudes about tanning affect those of their kids.

"Research suggests that girls who initiate tanning with their mothers tend to begin tanning at an earlier age, and are more likely to become regular, habitual tanners than girls who initially tanned alone or with a friend," he said.

The research letter on the findings appears in the Jan. 20 issue of JAMA Dermatology.

For more about the dangers of indoor tanning, try the U.S. Centers for Disease Control and Prevention.