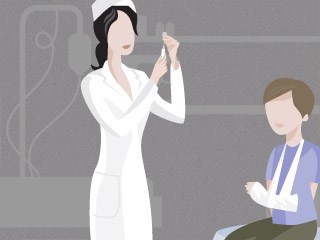 MONDAY, Jan. 4, 2016 (HealthDay News) -- When a major public health emergency, disaster or act of terrorism occurs, the United States may lack adequate resources to treat children who are affected, according to a new statement from the American Academy of Pediatrics.

The medical requirements of children -- for example, drug formulations or dosing -- would often be very different from those needed by adults when or if a chemical, biological, radiation or nuclear disaster strikes.

The AAP's Disaster Preparedness Advisory Council says that while "significant strides" have been made over the past couple of decades in helping stockpile disaster supplies that are specific to children, more must be done.

"Many vaccines and pharmaceuticals approved for use by adults as medical countermeasures [in disaster situations] do not yet have pediatric formulations, dosing information or safety information" aimed at children, the council explained.

"As a result, the nation's stockpiles ... are less prepared to address the needs of children compared with those of adults in the event of a disaster," the council stated.

Also, there's not enough research "to assure effectiveness and safety [of these medicines] and to identify evidence-based dosing guidelines for children," the council added in a news release.

In many cases, drugs meant to counter a biological or other threat have only been developed and tested on military personnel, the council said.

The U.S. Food and Drug Administration should begin to address this situation "by taking full advantage of all pathways currently available to ensure that products can be tested in pediatric populations," the experts suggested.

Then there are practical concerns: Kids often balk at swallowing pills or drinking liquid medications with a "yucky" taste. Reformulating emergency medicines to make them more palatable to children could help speed care in a crisis, the AAP advisors added.

Another idea: Store caches of emergency supplies near places where children congregate, such as schools or child care centers. The council also said that devising easy-to-understand instructions for parents or caregivers on how to give a specific drug to children would prevent a lot of stress and error if or when disaster strikes.

All of this will cost money, but cost "is not an appropriate rationale to limit or exclude [children] from such research," the council said.

"Children represent nearly a quarter of the U.S. population, but they are affected disproportionately by most disasters and public health emergencies," the AAP team said. "The recommendations outlined in this statement should be used to guide pediatricians; federal, state, and local government agencies; and others in addressing this need."

The statement was published online Jan. 4 and will appear in the February print issue of the journal Pediatrics.

There's more on the unique pharmaceutical needs of children at the U.S. Food and Drug Administration.