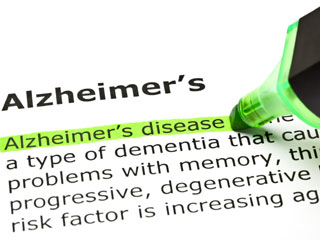 (HealthDay News) -- A couple of drinks a day may lower the risk of premature death in people with early stage Alzheimer's disease, according to a new study.

The study included just over 320 people in Denmark with early stage Alzheimer's disease. Those who had two to three alcoholic drinks a day had a 77 percent lower risk of dying during the study period than those who had one or fewer drinks a day, the investigators found.

"The results of our study point towards a potential, positive association of moderate alcohol consumption on mortality in patients with Alzheimer's disease," Sine Berntsen, from the University of Copenhagen in Denmark, and colleagues wrote.

"However, we cannot solely, on the basis of this study, either encourage or advise against moderate alcohol consumption in [these] patients," the study authors concluded.

The study did not prove a cause-and-effect relationship between drinking and a lower risk of death from early Alzheimer's, it only showed an association.

The report was published in the Dec. 10 edition of the online journal BMJ Open.

The study participants were followed for three years, and their caregivers let the researchers know how many drinks a day were consumed. During that time, 53 (16.5 percent) of the study patients died.

The reduced risk of death among moderate drinkers remained after the researchers accounted for a number of significant factors, including age, gender, other health problems, education level, smoking, quality of life and whether a person lived alone.

One explanation for the finding may be that moderate drinkers have a larger social network, which has been linked to improved quality of -- and possibly longer -- life, the study authors suggested.

But, they added, more research is needed to get a better idea of how alcohol affects mental decline and disease progression in people with early stage Alzheimer's disease.

The U.S. National Institute on Aging has more about Alzheimer's disease.