3 lessons for Gary Johnson and the Libertarians from the past

3 lessons for Gary Johnson and the Libertarians from the past 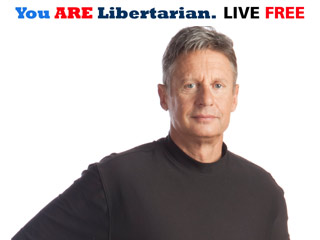 (WORLDNOW) -- Gary Johnson, the Libertarian Party's nominee for the 2012 election, isn't trying to get elected president this year. Instead he is trying to break the Libertarians into the 2016 presidential race by winning at least 5 percent of the vote this year.

In his "Be The 5 Percent" campaign video Johnson lays out America's current woes -- perpetual warfare, lost jobs, increased levels of bankruptcy and debt -- and places the blame not on Obama's Democrats or Romney's Republicans, but at the very idea of the two-party system. He ends the video by calling viewers to "do something revolutionary - cast a protest vote that counts." If Johnson carries 5 percent of the total vote, the Libertarians will receive federal funding for the 2016 election. This funding would go a long way towards allowing the party to increase their exposure and dispel the notion that we live in a two-party electoral system.

Of course, America's politics have not always been dominated by only two parties. Over the years a wide array of "third" or "minor" parties have dotted the national landscape. Some have been more successful than others, but each has a lesson that the Libertarians can learn from as they prepare for the 2016 election.

Here are three examples of how a political party can rise to, or fall out of, contention for electing a president.

Organic growth - The Whig Party successfully elected two presidents, William Henry Harrison (1840) and Zachary Taylor (1848). The party came together in opposition to the policies of Democrat Andrew Jackson and backed the "American System" -- a philosophy of building a strong country through public works, a national bank and protectionist tariffs. They had a core set of beliefs, powerful leaders like Henry Clay, were able to function on a national level and elected politicians to numerous offices in government until breaking apart during the build up to the Civil War.

The Libertarians already have the philosophy and a national network in place. Federal funding could help Johnson -- who has already said he will run again in 2016 -- rally the party into a more cohesive group and raise his stature on a national level. Enough votes and exposure could also land him a place in the 2016 presidential debates, which would enhance his status as a legitimate contender.

Growth from division -- In 1912 the Republican nomination came down to a battle between sitting president William Howard Taft and former president Teddy Roosevelt. Taft won the nomination and Roosevelt's supporters left the Republican Party to form the Progressive Party with Roosevelt as their nominee. Roosevelt's "Bull Moose" campaign ended up splitting the Republican vote, allowing the Democrat Woodrow Wilson to win.

Riffs and fractures occur from time to time in political parties. Most recently, the Tea Party has formed and operated from under the umbrella of the Republican Party -- had they broken from the Republicans and joined the Libertarian Party it would have made the Libertarians stronger at the expense of a rival party, putting them in a better position for national elections.

Grassroots opposition -- Originating in Kansas around 1890, the People's Party (or Populist Party) arose when drought and depression led to economic hardships for many people in the South and West. The party was involved in the elections of 1892 and 1896, but only marginally. The 1892 candidate, James B. Weaver, only received one million votes while their 1896 candidate, William Jennings Bryan, largely ignored the Populists as he was also the Democratic nominee. This dual-nomination, and the infighting that led up to it, hastened the demise of the party.

The Populists tried to harness the anger many citizens felt at the state of the country and ride that wave to electoral victory, but they could not control it. The Libertarians could face a similar fate if they are able to attract enough voters disaffected with the two dominant parties but are not able to unify them into a larger, stronger Libertarian party. Without a strong plan or leadership, no amount of funding will be able to help them win a national election.