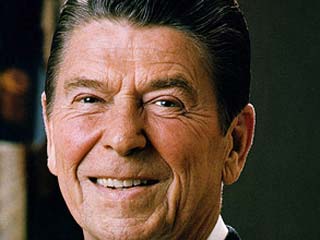 (FRANKLY) – Though it may be hard to imagine today, when elections are full of professional political spin and down-to-the-wire vote counts challenged in real time, not so long ago, the country could occasionally elect a president with not only a clear majority of support, but an overwhelming one.  Here are some of the biggest landslide elections from the last 50 years.

You can't help but feel a little bad for Republican Barry Goldwater. After all, how could anyone run a successful presidential campaign against Johnson, a vice president who was suddenly ushered into the Oval Office following John F. Kennedy's assassination less than a year before?

Thanks in part to Kennedy's popularity, and the country's collective support of his successor, Johnson won an overwhelming 486 Electoral College votes compared to Goldwater's 52.

To put this political drubbing into perspective, Johnson won a massive 61 percent of the popular vote, a number only topped by founding father Thomas Jefferson, when he took nearly 73 percent of the vote against Charles Pinckney in 1804  –  back when the number of total ballots cast was under 150,000.

Due in part to President Nixon pulling American soldiers out of Vietnam, and his foreign relations strides toward a positive relationship with China, the incumbent was easily swept back into office, leaving Democrat George McGovern in his dust. It didn't help that McGovern's first VP candidate, Thomas Eagleton, was forced out of the race after it was revealed he had previously undergone electroshock therapy for depression.

Nixon went on to win by 18 million popular votes, and take the Electoral College votes from 49 out of 50 states, leaving McGovern with only Massachusetts and Washington, D.C. This eventually lead to an iconic bumper sticker following Nixon's resignation in 1974, following the Watergate scandal: "Don't blame me; I'm from Massachusetts."

With a booming economy at his back, popular incumbent President Ronald Reagan was going to be tough to beat. And that was before Democratic challenger Walter Mondale said he would raise taxes if elected. Throw in his divisive vice presidential choice Geraldine Ferraro – noteworthy for being the first female VP candidate of a major party, but also for being too resistant to release her husband's tax records – and Mondale's campaign was finished almost as soon as it started.

Reagan would end up winning 49 out of 50 states, and 525 Electoral College votes, the highest total won by a Presidential candidate to date.

Elisa D. Keller is a news editor for Frankly Inc.