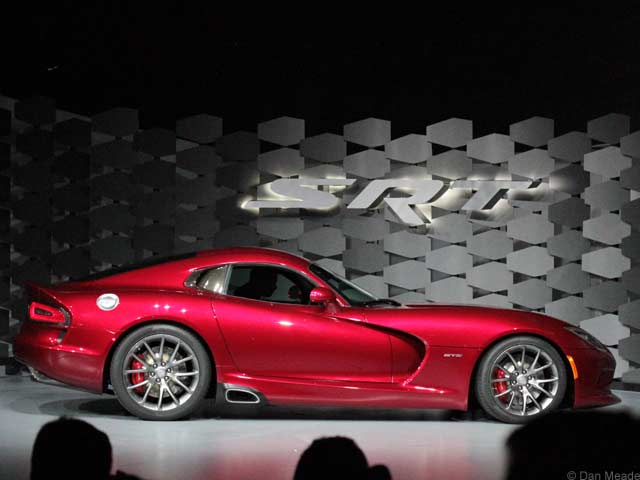 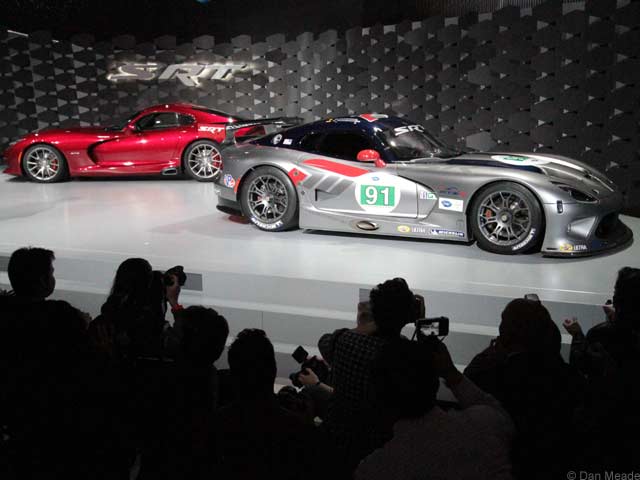 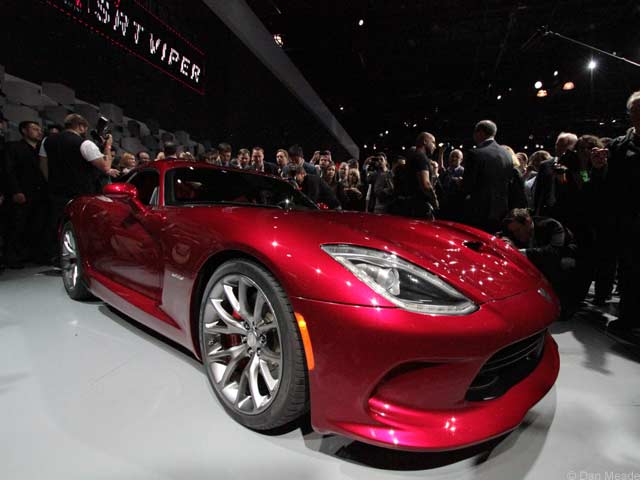 (WORLDNOW) -- Before the new 2013 SRT Viper could be seen, it could be heard. As lights dimmed and the excitement grew, a loud, deep growl could be heard coming from stage left. Seconds after the growl turned into the sound of a 640 horsepower engine revving, the Viper roared out onto on the stage looking as deadly and sexy as any femme fatale in a curve-hugging red dress ever did.

The Viper, no longer a part of the Dodge family but now the flagship of the newly independent SRT line of Chrysler vehicles, was presented as having two symbolic meanings on the first day of the 2012 New York International Auto Show. Ralph Gilles, President and CEO of SRT, said that the SRT Viper "shows that we still have a soul at Chrysler" and is meant to serve a message to other high-end muscle cars that "we want you to step it up."

If the Viper represents the remaining "soul" of Chrysler it is because the car name was almost sold a few years ago in the aftermath of Detroit's decimation during the recession of the late 2000s. That sale never went through, and the serpentine muscle car remained in the Chrysler family. Gilles, who likened the design process for this new model as "like being pregnant for 24 months" made the point that the SRT Viper was designed in America, and built in Detroit – both facts that play heavily in Chrysler's recent ad campaigns and both of which drew applause from the crowd before him.

In fact, the Viper is being built in the Conner Avenue Assembly Plant which had been idle for two years. You could almost use the story of this new model as an allegory for Chrysler as a whole: once nearly shut down and sold off, it has now roared back to life and is regaining market traction. All in the span of a few years.

But back to today. Coming in lighter and with a higher torque ratio than the last generation Viper, the SRT Viper has been built to be "one of the fastest cars in the world." To prove those weren't empty words, Gilles stepped off stage so that the SRT Viper GTS-R Le Mans racing edition could enter. Gilles would go on to announce that the SRT Viper Racing team will return to the American Le Mans Series (ALMS) later this year.

The 2013 SRT Viper was built having taken into consideration the thoughts of the line's fan base, known as "Viper Nation." Increased seating space, the return of a clam-shell hood, customizable interiors and even a "launch" button to lessen the amount of smoke created upon ignition are all included in the 2013 model. For those who can't afford to own one, the SRT Viper will also be featured in the Forza Motorsport 4 video game for X-Box 360, allowing "Viper Nation" members of all ages a chance to experience the sensation of driving one of the fastest cars in the world.

Dan Meade is the Auto editor for WorldNow and has been covering the New York International Auto Show since 2008. You can follow him on Twitter here.