The history of Texas' Mission Concepcion 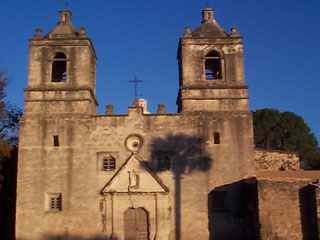 Provided by The National Parks Service

This mission was named in honor of Our Lady of the Immaculate Conception and Juan de Acuña, the Marqués de Casafuerte. The Marqués was Viceroy of New Spain (Mexico) when the mission transferred to the San Antonio River area in 1731.

Transfer of the Mission

Originally founded in 1716 in what is now eastern Texas, the mission was one of six authorized by the government to serve as a buffer against the threat of French incursion into Spanish territory from Louisiana.

Developed by Franciscans and after a tenuous existence and several moves, the mission was transferred to its present site in 1731.

This handsome stone church took about 20 years to build, and was dedicated in 1755. It appears very much as it did over two centuries ago. Due to the fact that it was built directly on bedrock, it never lost its roof, or its integrity. It remains the least restored of the colonial structures within the Park.

In its heyday, colorful geometric designs covered its surface inside and out. The exterior patterns have long since faded or been worn away. However, there are several rooms in which to see remaining frescos with all their detail and creativity.

While many of the existing frescos are simply decorative, several are symbolic. The most famous fresco, located on the convento room ceiling, is a possible depiction of God as a mestizo.

The church of Mission Concepción is an excellent example of Spanish Colonial architecture. A variety of features were incorporated into the construction of this and other existing mission churches in the park. Intricate Renaissance and Moorish details complement Romanesque forms and gothic arches. It is a cruciform (cross-shaped) building of limestone. The roof is vaulted with a dome, with which recent research is suggesting a deliberate placement of windows to illuminate the two side altars on specific feast days. Twin bell towers may have been topped by crosses similar to those in place today. Colorful Moorish designs mix with images showing both Native American and Spanish Catholic influences.

Mission builders, skilled master craftsmen recruited from Mexico, preserved the basic Spanish model, with modifications dictated by frontier conditions. The quarry from which the mission Indians dug the stone to build their community is located on the grounds of Mission Concepción. The church walls are 45 inches thick; however only the inside and outside facings are of solid stone - between the two layers is a filling of small stones and building debris. The native residents of the missions provided labor for the building of these churches. This activity was one way to foster a sense of community and provide a means of training the mission residents as artisans.

Mission Concepción served for many years as the residence of the Father President, a missionary elected from among his Franciscan brothers from the College of Querétaro to act as the local field coordinator. He was in charge administratively of all Queretaro missions along the San Antonio River.

From the beginning, Mission Concepción hosted religious festivals. Missionaries strove to replace traditional indigenous rituals and celebrations with Christian pageantry. Morality plays and processionals such as Las Pastores and Los Posadas, reenacting the events around the birth of Jesus, were commonly practiced.

The missionaries, through baptism and administration of other sacraments, formalized the Native Americans' acceptance of Christianity. This combination of strict teaching and celebration eventually bore fruit. Today, these missions churches are active parishes with many members tracing their roots to the mission residents of long ago.