Slideshow: A first person perspective on a morning in pre-Irene

Scroll below the slideshow for the story...

Slideshow: A first person perspective on a morning in pre-Irene NYC 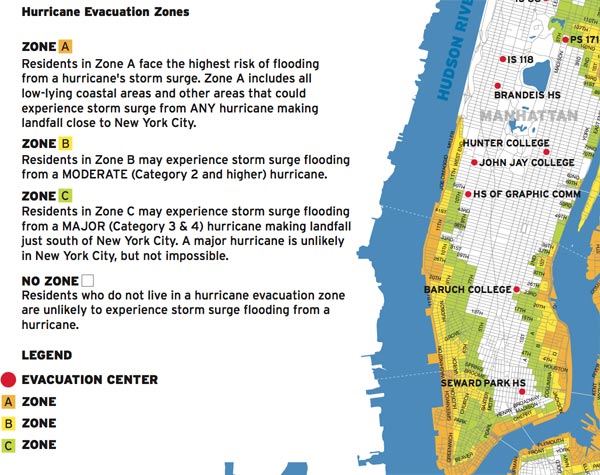 The map of NYC's evacuation zones

The close-up of Priscilla's neighborhood

By Priscilla Spencer
Provided by WorldNow

According to the widely circulated evacuation zone map of the city, New Yorkers on the east side of my street in lower Manhattan--Zone A--were under mandatory evacuation, yet the west side of the street--Zone B--was only at risk of flooding from a Category 2 storm or higher.

I had little faith that Irene would respect these carefully cartographed boundaries.

For New Yorkers like me who live on the B-side of the Zone A/Zone B border, the decision of whether or not to evacuate was a voluntary and difficult one.  Ultimately, I chose to stay.

Saturday morning, with little more than an hour before the planned public transit shutdown, I expected the other side of my street--the "Zone A" side--to be largely abandoned.  To my surprise, I saw people milling around casually, like any other day.  As I explored my neighborhood, I experienced a strange dichotomy: half of what I saw was absolutely ordinary, and the other half looked like a prelude to the apocalypse.

The nearby East River Park is a narrow strip of greenery between the residential area and the river, featuring sports facilities, walking paths, and other outdoor amenities.  The whole park is firmly in Zone A.  Yet there, joggers pounded the pavement, seemingly indifferent to the likelihood that their path would soon be inundated by several feet of water.  Dog owners exercised their pets in preparation for a long confinement indoors. Residents relaxed on the benches outside their buildings, where I'd seen them every morning for the past four years.  A USPS employee persisted in his route, moving quickly under the light spray of rain.

Yet the electronic signage on the adjacent highway demanded mandatory evacuation of the coastal areas.  When I stopped at the local grocery store, I found shelves picked clean of bread.  When I returned an hour later, they'd received a fresh supply, but the employees hadn't bothered shelving the loaves, knowing they'd soon be snatched up as well.  Shoppers at the convenience store across the street filled their carts and dollies with bottled water and snacks.  In the absence of flashlights or D-batteries, folks eyed half-empty shelves of scented candles.  (I bought candles intended for use in a menorah, despite the fact I'm not Jewish.)

I saw buses idling in the streets as Zone A residents piled luggage into its belly, bound for one of the evacuation centers.  An assertive young man urged an older gentleman--another inhabitant of the A/B border--to reconsider his decision to weather out the storm from his home.  Park employees loaded smaller vehicles onto a truck so they wouldn't be washed away by the rising river.  Stores shuttered their windows and entrances until finding an open business became a rarity.  Emergency vehicles from the NYFD and ConEd became a near-constant presence.

A sudden torrent of rain coupled with the looming transit shutdown cut my walk early, but my explorations of the neighborhood showed me a microcosm of the city.  I saw the evacuees, prudently taking advantage of the safe centers the city offered, and the defiant residents who chose to stay, the status of whether or not they were doing so legally dictated by a line on a map.  I saw the businesses, some closed and shuttered, some stubbornly facing down the storm with doors open.  New York takes all kinds--may we all safely weather out the storm!