Virginia earthquake felt up and down East Coast

Virginia earthquake felt up and down East Coast 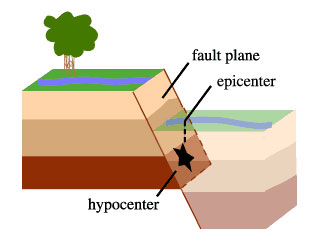 By Lisa Spodak
Provided by WorldNow

It's a sign of the times -- people all up and down the East Coast took to Twitter Tuesday afternoon when they felt their office buildings or homes shaking briefly during the early afternoon.  People asked if what they felt was actually an earthquake and commiserated as their friends and family from many states away chimed in with their experiences.

The U.S. Geological Survey confirmed that a magnitude 5.8 earthquake occurred in Virginia at 1:51 EDT.  According to the USGS, the earthquake was located about 27 miles east of Charlottesville, 34 miles southwest of Fredericksburg, 39 miles northwest of the capital city of Richmond and 84 miles southwest of Washington, DC.

For many east coasters, this was their first earthquake and until now, these seismic events were just something that happened somewhere else.  For those who don't know a lot of about earthquakes, here is some basic information from the USGS (and answers to some frequently asked questions and commonly held misconceptions):

An earthquake is caused by a sudden slip on a fault. The tectonic plates are always slowly moving, but they get stuck at their edges due to friction. When the stress on the edge overcomes the friction, there is an earthquake that releases energy in waves that travel through the earth's crust and cause the shaking that we feel.

Q: Can you predict earthquakes?

A: No. Neither the USGS nor Caltech nor any other scientists have ever predicted a major earthquake. They do not know how, and they do not expect to know how any time in the foreseeable future. However based on scientific data, probabilities can be calculated for potential future earthquakes. For example, scientists estimate that over the next 30 years the probability of a major EQ occurring in the San Francisco Bay area is 67% and 60% in Southern California.

The USGS focuses their efforts on the long-term mitigation of earthquake hazards by helping to improve the safety of structures, rather than by trying to accomplish short-term predictions.

A: The earliest reference we have to unusual animal behavior prior to a significant earthquake is from Greece in 373 BC. Rats, weasels, snakes, and centipedes reportedly left their homes and headed for safety several days before a destructive earthquake. Anecdotal evidence abounds of animals, fish, birds, reptiles, and insects exhibiting strange behavior anywhere from weeks to seconds before an earthquake. However, consistent and reliable behavior prior to seismic events, and a mechanism explaining how it could work, still eludes us. Most, but not all, scientists pursuing this mystery are in China or Japan.

Q: Can some people sense that an earthquake is about to happen? (earthquake sensitives)?

A: There is no scientific explanation for the symptoms some people claim to have preceding an earthquake, and more often than not there is no earthquake following the symptoms.

Q: Is there earthquake weather?

A: In the 4th Century B.C., Aristotle proposed that earthquakes were caused by winds trapped in subterranean caves. Small tremors were thought to have been caused by air pushing on the cavern roofs, and large ones by the air breaking the surface. This theory lead to a belief in earthquake weather, that because a large amount of air was trapped underground, the weather would be hot and calm before an earthquake. A later theory stated that earthquakes occurred in calm, cloudy conditions, and were usually preceded by strong winds, fireballs, and meteors.

There is no such thing as "earthquake weather". Statistically, there is approximately an equal distribution of earthquakes in cold weather, hot weather, rainy weather, etc. Very large low-pressure changes associated with major storm systems (typhoons, hurricanes, etc) are known to trigger episodes of fault slip (slow earthquakes) in the Earth's crust and may also play a role in triggering some damaging earthquakes. However, the numbers are small and are not statistically significant.

Q: Are there more earthquakes in the morning/in the evening/at a certain time of the month?

A: Earthquakes are equally as likely to occur at any time of the day or month or year. The factors that vary between the time of the day, month, or year do not affect the forces in the earth that cause earthquakes.

Q: Can the ground open up during an earthquake?

A: Shallow crevasses can form during earthquake-induced landslides, lateral spreads, or other types of ground failures. Faults, however, do not open up during an earthquake. Movement occurs along the plane of a fault, not perpendicular to it. If faults opened up, no earthquake would occur because there would be no friction to lock them together.

Q: Do earthquakes cause volcanoes?

A: No, there are different earth processes responsible for volcanoes. Earthquakes may occur in an area before, during, and after a volcanic eruption, but they are the result of the active forces connected with the eruption, and not the cause of volcanic activity.

Q: Can you prevent large earthquakes by making lots of small ones, or by "lubricating" the fault with water or another material?

As for "lubricating" faults with water or some other substance, injecting high pressure fluids deep into the ground is known to be able to trigger earthquakes to occur sooner than would have been the case without the injection. However this would be a dangerous pursuit in any populated area, as one might trigger a damaging earthquake.

A: Although it may seem that we are having more earthquakes, earthquakes of magnitude 7.0 or greater have remained fairly constant throughout this century and, according to our records, have actually seemed to decrease in recent years.

There are several reasons for the perception that the number of earthquakes, in general, and particularly destructive earthquakes is increasing.

In 1931, there were about 350 stations operating in the world; today, there are more that 4,000 stations and the data now comes in rapidly from these stations by telex, computer and satellite. This increase in the number of stations and the more timely receipt of data has allowed us and other seismological centers to locate many small earthquakes which were undetected in earlier years, and we are able to locate earthquakes more rapidly.

The NEIC now locates about 12,000 to 14,000 earthquakes each year or approximately 50 per day. Also, because of the improvements in communications and the increased interest in natural disasters, the public now learns about more earthquakes. According to long-term records (since about 1900), we expect about 18 major earthquakes (7.0 - 7.9) and one great earthquake (8.0 or above) in any given year. However, let's take a look at what has happened in the past 32 years, from 1969 through 2001, so far. Our records show that 1992, and 1995-1997 were the only years that we have reached or exceeded the long-term average number of major earthquakes since 1971. In 1970 and in 1971 we had 20 and 19 major earthquakes, respectively, but in other years the total was in many cases well below the 18 per year which we may expect based on the long-term average.

2) The population at risk is increasing. While the number of large earthquakes is fairly constant, population density in earthquake-prone areas is constantly increasing. In some countries, the new construction that comes with population growth has better earthquake resistance; but in many it does not. So we are now seeing increasing casualties from the same sized earthquakes.

3) Better global communication. Just a few decades ago, if several hundred people were killed by an earthquake in Indonesia or eastern China, for example, the media in the rest of the world would not know about it until several days, to weeks, later, long after such an event would be deemed �newsworthy�. So by the time this information was available, it would probably be relegated to the back pages of the newspaper, if at all. And the public Internet didn't even exist. We are now getting this information almost immediately.

4) Earthquake clustering and human psychology. While the average number of large earthquakes per year is fairly constant, earthquakes occur in clusters. This is predicted by various statistical models, and does not imply that earthquakes that are distant in location, but close in time, are causally related. But when such clusters occur, especially when they are widely reported in the media, they are noticed. However, during the equally anomalous periods during which no destructive earthquakes occur, no one deems this as remarkable.

A temporal increase in earthquake activity does not mean that a large earthquake is about to happen. Similarly, quiescence, or the lack of seismicity, does not mean a large earthquake is going to happen. A temporary increase or decrease in the seismicity rate is usually just part of the natural variation in the seismicity. There is no way for us to know whether or not this time it will lead to a larger earthquake. Swarms of small events, especially in geothermal areas, are common, and moderate-large magnitude earthquakes will typically have an aftershock sequence that follows. All that is normal and expected earthquake activity.

Q: What is the "Triangle of Life" and is it legitimate?

A: The "Triangle of Life" is a misguided idea about the best location a person should try to occupy during an earthquake. It is listed in the Urban Legends category on the Snopes Urban Legends Reference website.

Drop, cover, and hold under a table or desk is still the best recommendation, according to the American Red Cross.

Q: Where can I buy a Richter scale?

A: The Richter scale is not a physical device, but a mathematical formula. The magnitude of an earthquake is determined from the logarithm of the amplitude of waves recorded on a seismogram at a certain period.