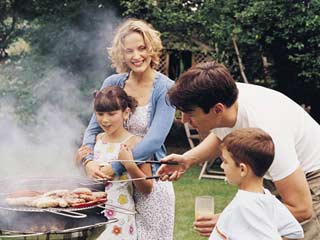 Six-out-of-ten Americans say they can't wait to fire up the grill according to a new poll conducted by the Hearth, Patio & Barbecue Association, kicking off the peak outdoor cooking season with National Barbecue Month in May.

In fact, nearly 90 percent say they plan to enjoy grilled food in their own backyard during the warmer months, indicating that Americans are ready to shake off the winter blues and get a taste of summer.

"After an especially brutal winter nationwide, people are ready to cook outside and enjoy the outdoors," said Leslie Wheeler, HPBA's Director of Communications. "While we are seeing an increase in grilling year round, it still remains the quintessential summer pastime. The warmer months bring people together around the grill for outdoor entertainment and delicious food with the benefits of ease and affordability."

While grilling is a shared pastime, HPBA's 2010 National Barbecue Month poll reveals that flavor preferences and grilling styles vary as widely as the people who use them. The nationwide poll shows America's grilling profile and consumer taste preferences.

Dress up or Strip Down?

Top Toppings
For hamburgers and other grilled meat or vegetable sandwiches:

No matter the preference for mustard or ketchup, bun or none, Americans agree that grilling provides an easy, cost-effective way to get out of the house and enjoy better tasting food during the warmer months. Specifically, Americans say the top pay-offs of grilling versus eating out or oven cooked meals include:

"Now with more accessories and products for grilling on the go, people are taking the benefits of outdoor cooking beyond the backyard and making any event into a special meal," adds Wheeler.