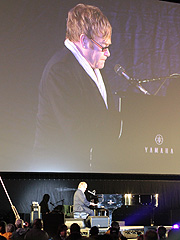 Elton John performing after the screening of The Union. (©Dan Meade)

Jane Rosenthal, one of the co-founders of the Tribeca Film Festival, opened the tenth incarnation of the festival  by thanking all of the fans present because "the "longevity is a testament to  your passion for the movies and of the arts… everything that this festival has become is because you have been with us every step of the way. This evening is for you, and I hope you all enjoy every moment of it." These themes -- commitment, passion, growth and the arts – would continue throughout the evening, most noticeably in the relationship between Elton John and Leon Russell.

John and Russell collaborated on the album The Union and this year's festival opened with Cameron Crowe's documentary of the same name which followed the making of that album from day one through its release. More than being just about the album, Crowe's The Union is about how John revitalized the life of his former friend and icon – since his heyday in the late 1960s and early 70s, Russell had fallen out of touch with John and into obscurity. The brain surgery that Russell required during the early stages of recording  made the entire process all the more poignant.

Watching the album being made, you see Russell growing stronger day by day and song by song, culminating with a performance  at New York's Beacon Theatre, once again controlling the band and the stage. The outdoor screening where the film was debuted, mere blocks from the site of the World Trade Center and in the shadow of the steadily rising Freedom Tower, could also have been a statement on how the festival has helped the area come back to life.

Started in the wake of the 9/11 attacks, the festival has now grown into an event with true international reach and shows no signs of faltering. The area around the World Financial Center, where the screening was held, was full of people for hours before the screening, the restaurants were packed, and joggers and carnival entertainers passed through the crowds. It was a vastly different scene from the dark days of 2001 which Rosenthal described as being full of empty stores and zero crowds.

To change those dark 2001 days, Rosenthal, her husband Craig Hatkoff and Robert DeNiro had the idea to use their celebrity friends as a catalyst to bring people back to Tribeca. That idea continues to this day.

Before the screening, Dennis Leary served as master of ceremonies, bringing out The Bangles to sing "Walk Like An Egyptian" with a choir of schoolchildren from P.S. 22. Later, Martin Scorsese would come out to give the final introduction to the film. Once the film ended, and to cap off the opening night of the festival, Elton John performed a short concert for all in attendance.

John played a six-song set, including "Tiny Dancer", "Rocket Man" and "Gone To Shiloh."  One of the lyrics in "Shiloh" gives The Union its name and this was the first time John had played it without Russell. He closed the night with a rendition of "Your Song" which he dedicated to all those present.

The 2011 Tribeca Film Festival runs from April 20 to May 1. More information can be found at http://www.tribecafilm.com/.