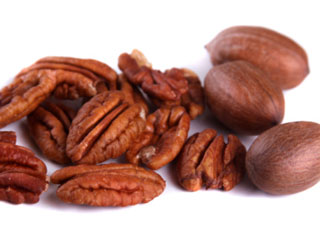 With the coming of spring, thoughts turn to warm weather, sleeveless shirts, bathing suits and shorts.  For many, it's a time to shed that extra weight added over the long winter months.  But if you think that losing weight means a tasteless, unsatisfying diet, think again.  In fact, start thinking pecans.

April is National Pecan Month, and there's never been a better reason to celebrate. In addition to their sweet crunch and undeniable flavor, clinical health studies show that pecans are good for you too.

According to Beth Hubrich, M.S., R.D., a dietitian with the National Pecan Shellers Association, pecans are loaded with fiber and unsaturated fat, which means they may increase metabolic rates and enhance satiety – making you feel fuller longer.

"Snacking on a few pecans makes you less likely to reach for other snacks between meals, which can run up your total calories," she said.

Pecans have a long history in the United States.  In fact, the pecan is the only tree nut that grows naturally in North America.  The word "pecan" is of Native American origin and it was used to describe "all nuts requiring a stone to crack."

The first pecan trees cultivated in the U.S. were planted in Long Island, N.Y., in 1772.  The popularity of pecans quickly spread down the Atlantic Seaboard, as pecan trees starting popping up in the gardens of such well-known Easterners as George Washington and Thomas Jefferson.  Commercial pecan production began in the early 1800s -- and pecans have thrived ever since.

Pecans can easily be added to a variety of dishes to improve the flavor and texture.  A small handful of pecans makes an appealing and appetizing snack and great addition to any dish for any dieter or weight-watcher.  And, pecans are loaded with heart-healthy unsaturated fats and more than 19 vitamins and minerals such as vitamin E, folic acid, calcium, copper, magnesium, manganese, phosphorus, zinc and several B vitamins.

Pecans are naturally cholesterol-free and sodium-free, and one serving provides about 10 percent of the government's recommended Daily Values for zinc and fiber.

The following tips using pecans can "liven up and lighten up" just about any dish:

For more information on pecans, including photos and recipes, visit www.ilovepecans.org.