The wages of snow: How this winter will affect spring gardens

The wages of snow: How this winter will affect spring gardens 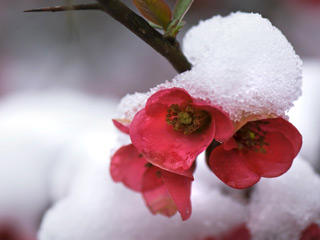 This winter, while beleaguered Americans continued to dig out from record snowfalls, the gardeners among them were secretly thrilled as they watched the freezing flakes pile up.

"They realized that snow cover can be good for many plants, especially perennial herbs and shrubs, because it provides insulation from freezing temperatures. Plants under snow cover are exposed to fewer drastic temperature changes, which are often more damaging than continued cold," says botanist Karen Snetselaar, Ph.D., chair and professor of biology at Saint Joseph's University in Philadelphia.

However, this year's insulating snow cover may have come too late, Snetselaar notes.

"Unseasonable fall and winter temperatures may have challenged plants more than last year. From September and well into November, warmer than normal temperatures might have encouraged some plants to keep growing. Then, December and January were colder than usual, and freezing temperatures may have damaged the plants that weren't yet dormant," Snetsellar says. "This year, it may be more likely that we'll lose plants because of those cold temperatures."

To make matters worse, Snetselaar says that as snow melts, many people will be surprised by damaged shrubs. "The storms brought heavy and wet snow, and if it didn't get brushed off evergreens right away, it was much harder to deal with."

Snetselaar advises to take extra care of evergreens during any remaining spring snowstorms. "When there is heavy snow, gently brush it off, pushing the evergreen's branches up, not down, which will help minimize broken branches. It's important to do this carefully, because the branches are quite brittle when it's cold."

Another highly visible effect of heavy snowfall are broken tree branches. Limbs that are partly broken or that may pose a danger should be pruned or removed right away, Snetselaar says.

"Consult an arborist for very large broken branches or for especially valuable trees," she suggests. "For less critical projects that don't require a professional, use good pruning practices, cutting branches back to sound wood and leaving a ‘collar,' which means to cut close to, but not too near to the trunk or larger branch. This facilitates wound healing."

Snetselaar adds that it is best to wait before pruning shrubs or trees that are bent or misshapen after heavy snow. "Some may gradually straighten up and be fine. And obviously, don't attempt to remove any branches that are near overhead wires. Leave those to the utility company."